The Pill, the epicenter of Boston Britpop, mod, soul and indie subculture and home to Boston’s ambitious outsiders, misshapes and beautiful ones, took its final bow after 16 improbable but mostly glorious years at Great Scott this past Friday night. I was 430 miles away. A part, yet apart.

It was a familiar feeling for me. I’m three-plus years removed from my Boston life, but for about a dozen of those 16 years I was a frequent Pill goer, often in the midst of channeling my best Brett Anderson on the checkered dance floor as the lights came on at 2 am. In later years I’d find my Friday nights ending Saturday morning as I made my way back home from after parties at the Barrows – home to Pill DJs Ken Powers and Michael Marotta – often collapsing onto my bed by 8 am, half-eaten corn muffin from Twin Donuts on the nightstand. I was a part of the scene, yet I remained apart. For me, The Pill was a release more than it was a lifestyle. Maybe it had something to do with my inability to commit to certain things. I suspect so, but I’ll spare us all the self-analysis today.

Conveniently located near Pill afterparties. Open at 6 am!

I made good friends on those dance floors. I also made a mess of myself quite a few times as well. I never would have lasted in Boston for as long as I did without that Friday night release, that chance to let my contradictions hold full sway. Equal parts awkward and bombastic. So while everyone was celebrating the last time Ken or Michael dropped that familiar drum intro to the Stone Roses “I Am the Resurrection”, (you can read a good account from The Good North’s Luke O’Neil  here) I found myself thinking instead about my first introduction to The Pill, a world that would come define a good part of who I am.

Fittingly, it involved Morrissey and a gladiola, cake and sweat soaked dance floor.

My buddy Rocky, visiting from New York for the weekend, had mentioned Morrissey’s 40th birthday party celebration at the Upstairs Lounge, a tiny, dingy slice of heaven situated across from the then FleetCenter and perched above one of the diviest of dive bars, The Penalty Box. I don’t think either of us knew quite what to expect as we climbed the narrow set of stairs up into the place, but the second I first set my eyes on that tiny bar, tiny pool table, tiny checkered dance floor, tiny DJ booth and tiny bathroom without a door, something fired in my brain. It may have been my first real exposure to mod girls.

What really got me was the people. I didn’t know who knew who or who had just met. But this wasn’t a place you just stumbled into – you sought it out and that made it seem like a gang, right from the start. There was a sense of belonging to something small but significant. Girls were handing out gladiolas, Morrissey’s back pocket filling flower of choice. Another had made a three-tiered (vegan) cake for the celebration. There was a cover band, The Salford Lads. There was Smiths karaoke. And there was the brilliant crowd of about 120 people crammed onto the dance floor. People danced awkwardly and didn’t care. It was sweaty. So very, very sweaty. And dead sexy.

I believe I fell in love with Boston that night.

I was still a pretty shy kid back then, but I knew enough to strike up a few conversations. It seemed like a moral imperative because these were people I wanted to know. I do remember awkwardly chatting up one girl at the end of the night. A success itself. 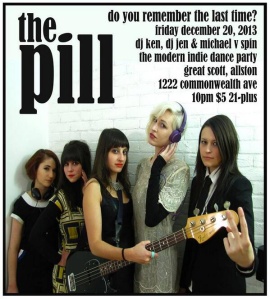 Much of the cake was on the floor, or at least it seemed that way. It felt like the break after a crashing wave. It was addictive. And so I came back. Sometimes alone. Sometimes with friends. Sometimes with a girl. Through all its homes; the Upstairs Lounge, the Ecko Lounge, Milky Way, Paradise and Great Scott, I came back.

For 16 years, The Pill fostered a community that felt a part of the fabric of the city, yet apart from it (I’m sensing a theme here). It wasn’t all sunshines and chemical smiles. Ok, there were a lot of chemical smiles. Allegedly. It was often brilliant, sometimes ugly, but never boring. Its passing will go largely unnoticed in Boston, but that’s kind of how it should be. Like purchasing a Suede import CD from Tower Records in the 90s, it was a best-kept secret. I’m happy it was a part of my life.

Sounds of The Pill

Everyone has his or her dance floor staples, but after years at The Pill, there are a handful of tunes that really resonate. Ken and Michael (and Jen Sullivan) worked tirelessly to build this night into something great and the music set the scene Friday after Friday. In addition to the Jacques Dutronc clip above which still floors me, when I think of The Pill, these are a few of the songs that are imprinted in my brain. Were you there? What were yours?

2 thoughts on “Do You Remember The First Time?”