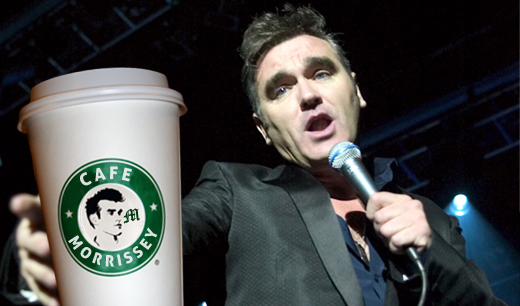 In my dream, I stumbled around a corner of a large building and noticed the art deco sign, cast in shiny aluminium on the wall: The Hotel Morrissey.  That’s pretty cool, I thought.

From there, I jumped a railing into the hotel (it’s a dream, if you have to ask), and ended up alone in a lobby cafe. Glancing up at the menu hanging from a wooden beam at the counter, I saw the familiar silhouette of Steven Patrick Morrissey, highlighting a house specialty, The Last of The Famous International Cappucinos. Brilliant.

Suddenly, and without warning, as dreams are wont to operate, the cafe had a line around the corner filled with Moz and Smiths aficionados, intrigued and fascinated by a hotel and cafe created around the man. I was able to order up a mug of hot chocolate, complete with a whipped cream pompadour and pushed my way through the crowd out into… consciousness.

It was the awakening and the breaking of a dream, but unlike most dreams, this one stuck with me. And I started to think of the possibilities of an actual Hotel + Cafe Morrissey. Marketing ideas, ad slogans.  “At the Hotel Morrissey, There Is A Light That Never Goes Out”. That shit writes itself.

And if anyone has some spare capital lying around and would like to turn this dream into reality, you’d really be doing millions of Morrissey fans a service. Won’t you consider investing in the surest of sure things?